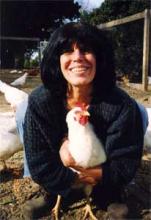 Karen’s articles and essays have appeared in newspapers across the country. She has appeared on numerous TV and radio shows including The Howard Stern Show, The Daily Show, Fact Finders on WB Channel 11 News @ Ten in New York City, and This American Life on National Public Radio.

On July 2, 2002, Karen was inducted into the U.S. Animal Rights Hall of Fame “for outstanding contributions to animal liberation.”

On April 20, 2007, media celebrity Ira Glass, host of the popular Public Radio International program This American Life aired on NPR, appeared on Late Night with David Letterman where he told Letterman and millions of viewers that his visit to United Poultry Concerns’ chicken sanctuary in 1998 led him to become a vegetarian.

Karen's other books include: A Home for Henny (a childrens book published by UPC); More Than a Meal: The Turkey in History, Myth, Ritual, and Reality (Lantern Books); and The Holocaust and the Henmaid’s Tale: A Case for Comparing Atrocities (Lantern Books).

Karen is a featured speaker at the annual National Animal Rights and Taking Action for Animals conferences in Los Angeles, Califnornia and Washington, DC. 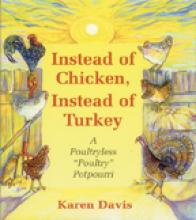