SACRED SONG of the HERMIT THRUSH 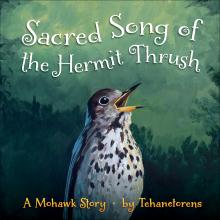 Long ago, when the Birds had no songs, only humans could sing. The Good Spirit walked the Earth and noticed a great silence. Realizing that the Birds had no songs, he devised a great game and told them that whichever one could fly the highest would receive a very beautiful song. But not all the Birds were honest. In his desire to win the game, the small Hermit Thrush jumped on the back of the great Eagle. The Eagle flew higher than any of the Birds, but when he came back to land, the Good Spirit said the Hermit Thrush had gone the highest, since he was on Eagle's back. Hermit Thrush was awarded a beautiful song, but in his shame for not being honest, he flew into the deep woods. To this day, you may hear the loverly song ot the Hermit Thrush, but you may not ever see him.

The telling is stately, with a steady, oral cadence. The dappled paintings offer field guide–worthy images of the bird characters and depict the Good Spirit with brown skin and long, straight black hair. Lovely.--Kirkus Reviews

Author Tehanetors (Ray Fadden) was a teacher and influential figure among the Mohawks of Akwesasne. The Mohawk Nation adopted him into the Mohawk Wolf Clan and gave him the name Tehanetorens, which has been translated as “He Walks through the Pines.” In 1930, Ray Fadden became one of the first teachers at the St. Regis Mohawk School in Hogansburg, New York. Ray published a series of articles that detailed the many contributions the North American Indian had made to modern civilization, ranging from technological innovations to foodstuffs and even democratic traditions. He also founded the Six Naitons Indian Museum in Onchiota, New York to provide information about the amazing heritage of the Haudenosaunee people. He passed away in November 2008, at the age of 98.

Illustrator  David Kanietakeron Fadden is an Akwesasne Mohawk artist who was born in Lake Placid, New York, and grew up in Onchiota. He is the grandson of Tehanetorens.