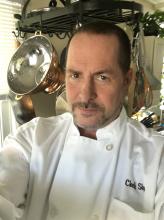 In the late summer of 2010, Skye Michael Conroy took PETA’s thirty-day pledge to adhere to a vegan diet and never turned back. Further influenced by the documentary Earthlings, the practice of nonviolence and non-exploitation of sentient beings became an intrinsic part of his spiritual path as well as his philosophical beliefs. As he experimented with plant-based cooking, his journey as a vegan chef unfolded.

What originated as a hobby culminated in a series of self-published cookbooks and evolved as he began studying the culinary arts in depth. Chef Skye attended Rouxbe Cooking School under the direction of renowned plant-based chef Chad Sarno and received his Plant-Based Professional Certificate in 2014.

While plant-based cooking and food science are his primary passions, he’s also an avid gardener and landscaper. Originally from Southern California, Chef Skye now resides in the northern Midwest with his partner, thirteen rescued cats, and one rabbit. Visit him at thegentlechef.com.